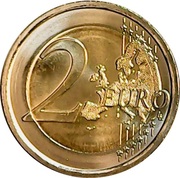 The 500th anniversary of the death of Leonardo da Vinci

The design shows a detail of the painting ‘Dama con l'ermellino’ (Lady with an Ermine) by
Leonardo da Vinci (Czartoryski Museum in Krakow). On the left, the inscription ‘Leonardo’, the initials of the author
Maria Angela Cassol ‘MAC’ and the logo ‘RI’ acronym of the Italian Republic; on the right, ‘R’, mintmark of the Mint of
Rome and the dates ‘1519-2019’, respectively the year of Leonardo’s death and the year of the coin issuance.
The coin’s outer ring depicts the 12 stars of the European flag.