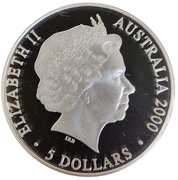 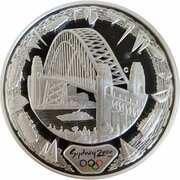 The Royal Australian Mint and the Perth Mint shared production of the sixteen coins in this Sydney Olympic 16 coin Fine Silver Set of coins. The reverse on this coin is surrounded by a border of boats and ships found on Sydney Harbour.

Bullion value: 27.79 USD Search tips
This value is given for information purpose only. It is based on a price of silver at 879 USD/kg. Numista does not buy or sell coins or metal.