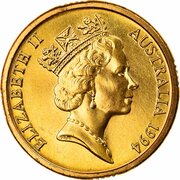 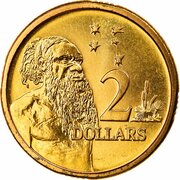 1/2 length figure of Aboriginal man at left, Southern Cross above, denomination at right, designer's initials below, Grass Tree to the far right

The Australian two dollar coin was introduced on 20th June 1988 replacing the $2 note that was withdrawn from circulation.  This last $2 Note & First $2 Coin Set was a private issue that celebrated the withdrawal and introduction of the paper note and the metal coin.

As with the one dollar paper note, the $2 note had a short service life and replacement with a coin was very cost effective. The Australian 2 dollar coin standard design is that of an Aboriginal elder and was the only design used until 2012 when the Mint began a run of commemorative $2 coins, some with colour printing. The designers initials (HH) only appeared on the 1988 & 1989 Coins. See below. 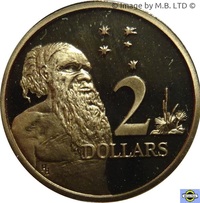