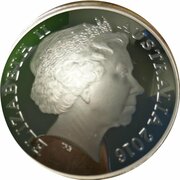 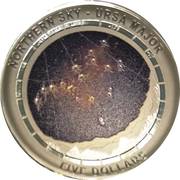 Constellation of Ursa Major in colour above a landscape. Location grid superimposed.

This is the second coin in the three coin series The Northern Sky. Gracing the Northern Skies year round, Ursa Major has fascinated astronomers and storytellers for ages. The celestial Great Bear and her seven major stars comprising the "Big Dipper", are rich in folklore.