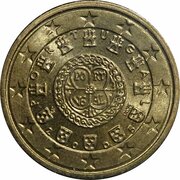 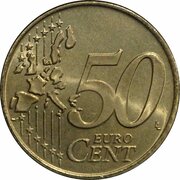 The second royal seal of 1142 of Alfonso Henriques, the first king of Portugal, is encircled alternately by the country's seven castles and the five coats of arms, which appear on the Portuguese flag, and the letters of the word "PORTUGAL", themselves encircled by the twelve stars of the European Union.