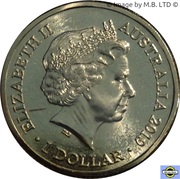 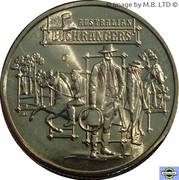 This NCLT coin which commemorates Australia's Bushranger Era was issued by the RAM in the "Four Coin "C" mintmark & [B], [S], [M] Privymark" set for 2019. The Four Coin Set has the IRB Obverse.
(Image of the above coin is the "C" Canberra Mitmarked version) 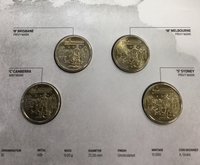 Colonial Australia was a dangerous place, with renegades known as bushrangers roaming the roads and towns. The exploits of Australia's most notorious bushranging gang; Ned Kelly with his companions Dan Kelly, Joe Byrne and Steve Hart are part of Australia's folklore. During a time of social and political unrest, the Kelly Gang with their iconic armour sparked a reputation that passed into legend. With this four coin set the RAM remembers the nefarious Kelly Gang. Their anti-establishment stance; courage under fire and sympathy for the underdog, have become characteristic of the Australian 'larrikin' identity.

A coin with the same reverse was also available from the Visitor Press on the ground floor of the RAM in Canberra with "C" mintmark for $3.00. However it has the Jody Clark 6th Portrait Obverse. Coins issued with (B), (M), (S) & (MAP) Counterstamps during 2019 at various RAM Pop Up Shop events in Coincards also have the Jody Clark 6th Portrait on the obverse of the coin.