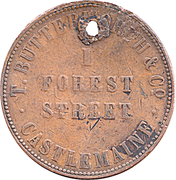 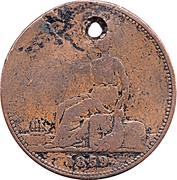 Although this business is named for an individual it was in fact run by four Butterworth brothers, Thomas, Robert, Benjamin and John. Gardner believed that they were from Surrey in England. The Public Records Office of Victoria Index to Immigrants to Victoria does not provide any evidence that four men with these names came to Australia at the same time during the 1850s, but they may have come separately.
The brothers purchased their business from Messrs Sargood (whose business later spread around Australia and to London as Sargood Bros.) and Gardner. The 1856 Castlemaine Commercial Directory includes four listings for T. Butterworth & Co., under the following headings: General Merchants, 1 Forest Street; Grocer, Market Square; Storekeepers, 1, 2, 3, Forest Street; Wine Merchants, 3 Forest Street. In the back pages of the same directory the brothers adverstised themselves as 'Wholesale and Retail Drapers, Grocers, and wine and spirit, and general provision merchants.' This directory provides the earliest indication of when the business was started. During the second half of 1861Butterworth and Co. advertised twice in most editions of The Mount Alexander Mail, advertising their role as warehousemen in the Business Directory on the front page, and their Gold Office on the back page.
The brothers were noted for conduct befitting successful men of their time, and involved themselves in the life of their community. Tom and Ben played Cricket for the Australian squad that played against the touring English Eleven in 1863, and Ben represented Victoria on several occasions during the 1860s. They were noted in the 1863 Victorian Cricketers Guide as batsmen and capable fielders (Gardner). Another of the businessmen with premises on Market Square, draper William Froomes, was also a member of the 1863 Australian squad. He issued a penny token in 1862, as did their neighbours R. Calder & Co., and Murray and Christie - both General Stores.
As Gardner observes, Castlemaine was not as large or rich a field as either Ballarat or Bendigo, and while great fortunes were made they were also lost, as the gold field and the associated business activity contracted. He states that the Butterworths recognised the decline of their prospects and moved to Dunedin, New Zealand, where their store was said to be thriving in 1910. The 1862 Castlemaine directory held by the State Library of Victoria list the business, as well as private addresses for the various brothers. However, in the 1865 directory lists neither the business, nor residences for any of the brothers, giving a period for their move to Dunedin. Given that directories tended to be compiled and published around the start of the calendar year, it seems likely that they moved between 1862 and 1864.