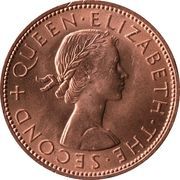 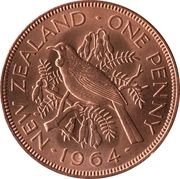 Note: with or without shoulder strap (see below)

Tui Bird (Prosthemadera novaeseelandiae, Māori name: tūī) standing in the branches of a kōwhai tree (Sophora sp.) with legend around and date below.

The BU Uncirculated Sets issued in 1965, which was the last year of minting of the pre-decimal coins, came in three different versions.

The Blue Label Set included special selected and polished uncirculated coins. Sometimes described as "Prooflike".
The Blue Label set had a mintage of 25,000 in total.