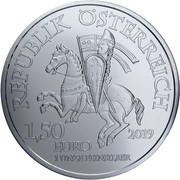 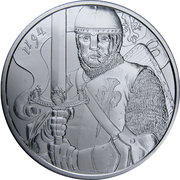 825th Anniversary of the Vienna Mint

Leopold V de Babenberg on horseback to the left, after an original found at the monastery of Heiligenkreuz.

The first of three coins celebrating the 825th Anniversary of the Vienna Mint is dedicated to a key figure in the monetary history of Austria. A man whose legacy still continues today, Duke Leopold V would no doubt approve of the coin struck in his honour, as it not only contains one ounce of fine silver but is also a coveted collector piece.

In 1191, two crusaders, Duke Leopold V of Austria and King Richard ‘The Lionheart’ of England, quarrelled during the capture of the city of Acre. In December 1192, on his way home from the Holy Land, Richard was taken prisoner by Leopold on the outskirts of Vienna. Held in the Castle of Dürnstein, legend has it that Richard was located by his minstrel Blondel, who travelled from castle to castle singing a song that only he and his master knew. The huge ransom in silver, which Leopold managed to extort from the English in return for Richard’s release, was used to found the original Mint in Vienna in 1194. Leopold also used the silver to settle the land and build strongholds such as Wiener Neustadt. Leopold’s achievements helped Ostarrichi, as Austria was then known, to become a major European power. The coin shows the knight, crusader, adventurer and statesman dressed for battle.

Members from this site want to exchange it: smotarib, stratus, numis13006, desadeleer

Bullion value: 24.28 USD Search tips
This value is given for information purpose only. It is based on a price of silver at 781 USD/kg. Numista does not buy or sell coins or metal.