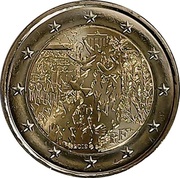 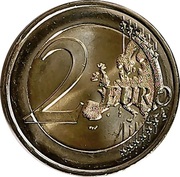 30 years of the fall of the Berlin Wall

Thirty years ago, the Berlin Wall fell. Beyond the impact on German society, it was an
event with global consequences. On November 9th, 1989, this occasion marks the end of the cold war and announces
an appeasement after several decades of international tensions. At the European level, it is the first step towards the
reunification of one of the leading countries of the European Union. This major change was after materialised by the
Moscow Treaty of which France was a signatory. The European Union welcomed then 16 million new citizens in just
one year; almost the structural and economic effect of welcoming a new country!
The design represents the Berlin Wall, opened in its centre, letting the doves (allegories of the international appeasement),
and the jubilant crowd pass. In the background, the Brandenburg Gate, Berlin’s symbol par excellence, is represented. The
mention ‘30 years of the fall of the Berlin Wall/30 Jahre Mauerfall’ is inscribed on one side of the wall. At the bottom of the
design is the year of issuance ‘2019’ and at its right the indication of the issuing country ‘RF’ (standing for République
Française).
The coin’s outer ring depicts the 12 stars of the European flag.