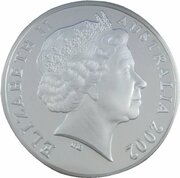 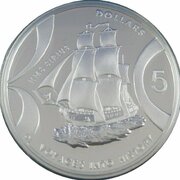 The Royal Australian Mint issued in 2002 a  Voyages into History Masterpieces in Silver Proof $5 Dollars, Four Coin Set with reverse designs paying tribute to four of the European vessels that were to sail the waters of "The Great South Land"  long before the days of steam

HMS Sirius was the flagship of the First Fleet, commanded by Captain Arthur Phillip RN who was also to be the first Governor. The First Fleet had 1500 convicts, marines, officers and sailors packed into 11 ships. It left England on 13 May 1787 and arrived at Botany Bay on the 18 January 1788. The settlement was moved a few days later to Sydney Cove (26 January 1788).