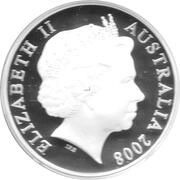 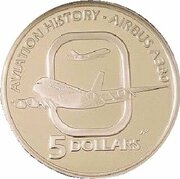 The Royal Australian Mint issued in 2008 a Flying through Time Masterpieces in Silver Proof $5 Dollars, Two Coin Set with reverse designs paying tribute to Aviation History of the twentieth century. The coin was also released in a Six Coin Set.

This coin depicts the world's biggest passenger aeroplane, the Airbus A380, which became part of QANTAS's fleet in 2008. Production is expected to finish in 2022.

Bullion value: 30.11 USD Search tips
This value is given for information purpose only. It is based on a price of silver at 830 USD/kg. Numista does not buy or sell coins or metal.