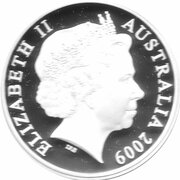 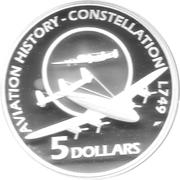 The Royal Australian Mint issued in 2009 a Flying through Time Masterpieces in Silver Proof $5 Dollars, Two Coin Set with reverse designs paying tribute to Aviation History of the twentieth century. The coin was also released in a Six Coin Set.

These days a flight on the 'Kangaroo Route' from Sydney to London takes fewer than 24 hours. In 1947 the Lockheed Constellation L749 took 4 days to reach London, with six stops and 55 hours in the air.

Bullion value: 31.97 USD Search tips
This value is given for information purpose only. It is based on a price of silver at 881 USD/kg. Numista does not buy or sell coins or metal.