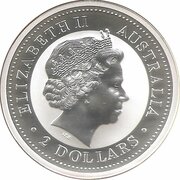 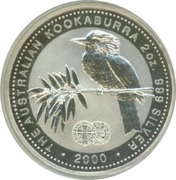 Kookaburra on a branch (similar to KM# 616) with a special privy mark depicting the overlapping reverse and obverse designs of an English Hammered Silver King Edward penny, struck between 1272-1327 AD. Known as the Long Cross Penny, as depicted on the reverse, the long cross design was introduced during this period to alleviate the problem of people ‘clipping’ the coin edges. A stylized, non-realistic portrait of the reigning English Monarch, Edward I, is shown on the obverse.

Bullion value: 51.64 USD Search tips
This value is given for information purpose only. It is based on a price of silver at 831 USD/kg. Numista does not buy or sell coins or metal.