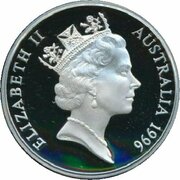 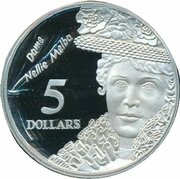 Picture of Dame Nellie Melba, Value and denomination to the left.

The Royal Australian Mint issued in 1996 a National Identity Masterpieces in Silver Proof $5 Dollars, Five Coin Set with reverse designs paying tribute to people and events that have had a major influence in making us uniquely Australian. This particular coin celebrates Dame Nellie Melba.

Dame Nellie Melba (1861-1931) was during her lifetime, almost larger than life. Her glorious voice dazzled audiences in Australia, England and the USA. Her tough will and extraordinary self-confidence made her an ambivalent hero of national identity. Australians loved - and loved to criticise - their most flamboyant 'tall poppy'.

Bullion value: 28.14 USD Search tips
This value is given for information purpose only. It is based on a price of silver at 850 USD/kg. Numista does not buy or sell coins or metal.