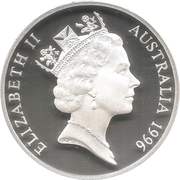 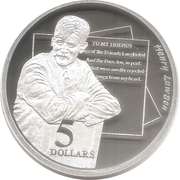 Henry Lawson standing in front of the poem TO MY FRIENDS, value and denomination at the bottom.

The Royal Australian Mint issued in 1996 a National Identity Masterpieces in Silver Proof $5 Dollars, Five Coin Set with reverse designs paying tribute to people and events that have had a major influence in making us uniquely Australian. This particular coin celebrates Henry Lawson.

Henry Lawson (1867 - 1922) published his first poem in the nationalist magazine, the Bulletin, in 1887. Called Á Song for the Republic', it was a stirring call to Australians to approach the new century with courage and commitment to the nation. Lawson was central in the move towards 'realism'in literature. instead of a gentle, idyllic place, the Australian landscape was depicted as indifferent to its inhabitants, who were battlers - gaunt, tragic, but noble. In his depiction of self-reliant, indomitable,  independent Australians, Lawson put into words the qualities that contributed to the nation's sense of self. He was the first Australian write to be given a State funeral.

Bullion value: 28.11 USD Search tips
This value is given for information purpose only. It is based on a price of silver at 849 USD/kg. Numista does not buy or sell coins or metal.