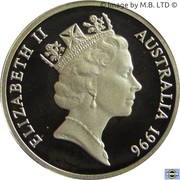 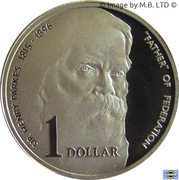 100th Anniversary of the Death of Sir Henry Parkes

Image of Sir Henry Parkes, the Father of Federation

In 1996 the RAM released a $1 coin into circulation that commemorated the 100th anniversary of the death of Sir Henry Parkes. Known as the "Father of Federation" he did not support the concept strongly until the last few years of his political life. The general consensus of his support is that it was one of convenience, but despite this he is known for a strong speech at Tenterfield urging Federation of the colonies of Australia. His reasons for doing so were mixed at best, and he is recorded as saying that federation would be a great idea so that trouble makers in Broken Hill would become South Australia's problem and not those of NSW!

This is the Silver Proof edition of the NCLT coin that was released by the RAM in a capsule in a plush case with only interrupted reeding. No milled edge version was released as per earlier editions of Silver 25mm Australian Dollar coin.

Bullion value: 9.43 USD Search tips
This value is given for information purpose only. It is based on a price of silver at 887 USD/kg. Numista does not buy or sell coins or metal.