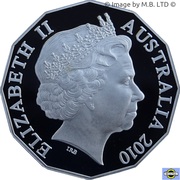 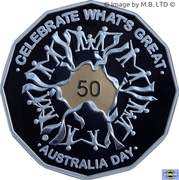 A map of Australia made of ribbons with proud Australians young and old banded together by these ribbons. The Map is created in Gold Plate

Celebrating Australia Day in 2010 the Royal Australian Mint in collaboration with the Australia Day Council has released this commemorative .999 Silver part Gold Plated coin in a capsule in a numbered limited edition plush blue box with certificate. 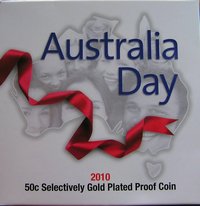 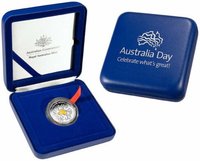 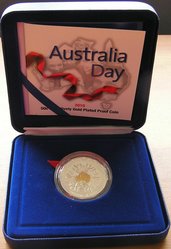 It wasn't until as recently as 1994 that the whole of Australia has consistently celebrated Australia Day on the 26th of January as a public holiday. It was on the 26th January 1788 that The First Fleet from England commanded by Captain Arthur Phillip landed at Sydney Cove and raised the Union Jack Flag founding the Colony of New South Wales.

Bullion value: 16.06 USD Search tips
This value is given for information purpose only. It is based on a price of silver at 882 USD/kg. Numista does not buy or sell coins or metal.