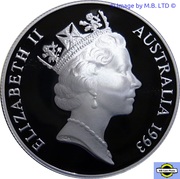 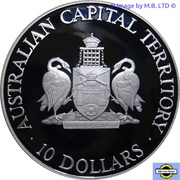 Coat of Arms of the Australian Capital Territory:
A Black Swan & a Mute Swan, supporting a Shield which features a Triple Towered Castle with Portcullis set above a White Rose, set below a Sword & Sceptre surmounted by an Imperial Crown. Motto in scroll below.

Lettering:
AUSTRALIAN CAPITAL TERRITORY
10 DOLLARS
FOR THE QUEEN, THE LAW AND THE PEOPLE

Released by the RAM in 1993 to commemorate the Australian Capital Territory is this $10 Sterling Silver Proof (.925) coin. It was released in a capsule in plush beige case. 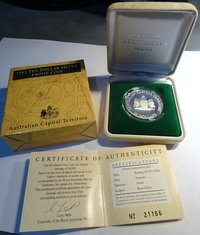 This 1993 $10 coin is the eigth in a series which features the coat of arms of the individual States and Territories of the Commonwealth of Australia. The coin features the official Australian Capital Territory Coat of Arms.