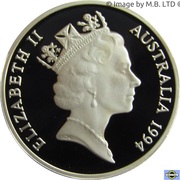 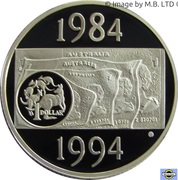 10th Anniversary of the Dollar Coin

Image of the old Australian $1 note morphing and merging into the Mob of Roo's one dollar coin.

This NCLT Silver (.925) Proof Dollar Decade coin was released in two different versions as seen here.
The general proof cased Version 1 had a mintage of 20,000 and had the normal interrupted edge reeding. 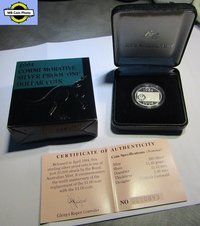 A different proof cased Version 2, mintage 5,001, was released at the 1994 Sydney ANDA Show that had full edge reeding. 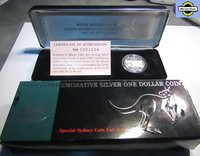 The Aluminium-bronze version of the coin was released as a NCLT coin by the RAM in 1994 to commemorate 10 years of the $1 coin which was introduced in 1984 replacing the old $1 Note.

Bullion value: 9.37 USD Search tips
This value is given for information purpose only. It is based on a price of silver at 882 USD/kg. Numista does not buy or sell coins or metal.