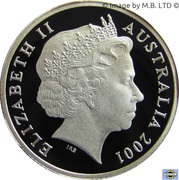 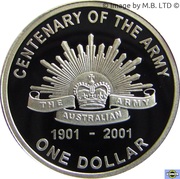 100th Anniversary of the Army

Lettering:
CENTENARY OF THE ARMY
THE ARMY
AUSTRALIAN
1901 - 2001
ONE DOLLAR

This Fine Silver (.999) Proof NCLT coin was issued in limited numbers by the RAM in 2001 in a capsule inside a plush green/grey box. It did not have a mintmark.

The reverse of this coin shows the iconic "Rising Sun" Australian Army badge surrounded by the legend "The Australian Army 1901 - 2001". The Rising Sun badge originates back to 1902 when a badge was required for Australian colonial forces operating in South Africa during the Boer War. The badge depicts the Imperial Crown and a banner with the words "The Australian Army". The 'sun rays' or rising sun are in fact not that at all, originally they were to depict a semi circle of thrusting swords and bayonets around the crown which in 1902 was to depict the co-operation between the navy (the swords) and the army (the bayonets).

An Aluminium-bronze version of the coin was also released in a coin card. It was available with a "C" Mintmark from the Public Gallery Press at the RAM. Australia Post issued the same coin with "C" Mintmark in a PNC. The coin also came with an "S" Mintmark at the Sydney Royal Easter Show.

Bullion value: 10.27 USD Search tips
This value is given for information purpose only. It is based on a price of silver at 881 USD/kg. Numista does not buy or sell coins or metal.