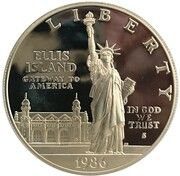 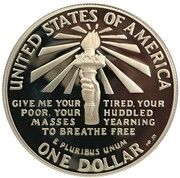 Statue of Liberty on Ellis island

The Statue of Liberty with the main building of Ellis Island in the background.

The statue’s hand with a lit torch are depicted with the concluding words of Emma Lazarus’s poem The New Colossus.

Lettering:
UNITED STATES OF AMERICA
GIVE ME YOUR TIRED, YOUR
POOR, YOUR HUDDLED
MASSES YEARNING
TO BREATH FREE
E PLURIBUS UNUM
MP JM
ONE DOLLAR

The Statue of Liberty Silver Dollar was struck in proof at the San Francisco Mint and in uncirculated at the Philadelphia Mint. The coins had a maximum authorized mintage of 10 million, and eventually sold more than 70% of that amount. The silver dollar was sold individually or as part of a two, three, or six coin set. The coins could initially be purchased at a discounted “pre-issue” price before regular pricing went into effect.