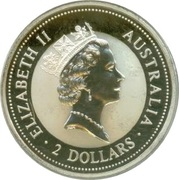 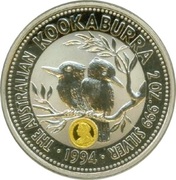 Pair of Kookaburras on branch. Privy mark, depicting the obverse design of the sovereigns minted at Perth Mint 1899-1901, featuring the veiled head of Queen Victoria, KM# 13.

Bullion value: 55.84 USD Search tips
This value is given for information purpose only. It is based on a price of silver at 899 USD/kg. Numista does not buy or sell coins or metal.