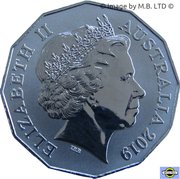 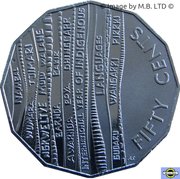 This circulating commemorative coin was released by the RAM on 10th April 2019. It was also released in a Coincard in Frosted Uncirculated finish. The coin pictured on this page is the Frosted Uncirculated version.
The coin has 15 different versions of the words that mean "Coin" or "Money" in Australian Aboriginal or Torres Strait languages. The words do not run left to right on the coin they run bottom to top. 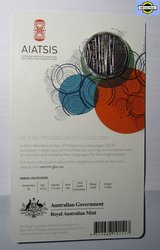 Australia Post has also released a PNC that contains this coin limited to 6,500 copies. 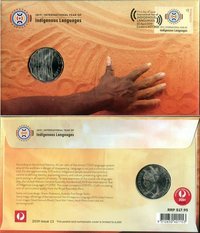 Indigenous languages throughout the world are under threat, and Australia has already lost many of its unique and varied Indigenous languages. With this 2019 50c Uncirculated Coin, the Royal Australian Mint along with AIATSIS recognizes 2019 as the International Year of Indigenous Languages. Australia’s surviving Indigenous languages are vital cultural resources that are now being actively treasured, recorded, revitalized and shared for future generations.

A Fine Silver (.999) Proof version of the coin has also been released by the RAM in a capsule in a plush box.