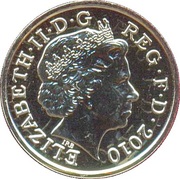 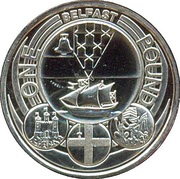 City of Belfast coat of arms in a circle, with on top a bell, a geometric design, below a sailing ship. Below, three smaller coats of arms of Edimburgh, London and Cardiff. Value separated.

Translation: What shall we give in return for so much