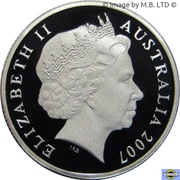 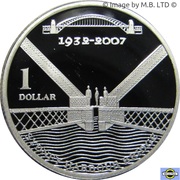 Image of the complete Harbour Bridge above
an image of the joining of the two halves of the Bridge.

The RAM released this NCLT Fine Silver (.999) proof coin to Commemorate the 75th Anniversary in 2007 of the completion of the Sydney Harbour Bridge. It was released in a capsule inside a plush square black box with numbered certificate.

Aluminium-bronze versions of this NCLT coin were also released by the RAM to commemorate this event in a folding coincard with (C), (B), (M), & (S) Counterstamps at various ANDA & Royal Shows and the Public Gallery Press at the RAM during the year.
NOTE: "B" and "S" Counterstamps also exist with a shallow letter variety.

The bridge has become a national icon for Australia recognised all over the world. It was opened on 19th March 1932 after 8 years of construction with planning beginning in 1912. At it's highest point the bridge measures 134 meters high and spans 503 meters with a total length of 1150 meters. The bridge was built from each side with approach spans erected first then a main arch. Both sides of the arch were joined on August 19th 1930 much to the admiration of Sydneysiders.