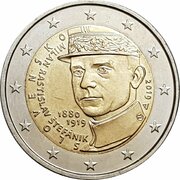 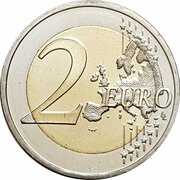 The 100th anniversary of the death of Milan Rastislav Štefánik

The design features a portrait of Milan Rastislav Štefánik. To the left of the portrait are the dates of Štefánik’s birth ‘1880’ and death ‘1919’, one above the other. On the left side of the inner part of the coin, in a semi-circle, are the name ‘MILAN RASTISLAV ŠTEFÁNIK’ and the name of the issuing country ‘SLOVENSKO’. The year of issuance ‘2019’ is between the portrait and the right side. Below the year are the stylized letters ‘PV’, the initials of the designer, Peter Valach, and below them is the mint mark of the Kremnica Mint (Mincovňa Kremnica), consisting of the letters ‘MK’ placed between two dies.
The coin’s outer ring depicts the 12 stars of the European flag.

» Buy coins from Slovakia at eBay