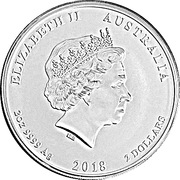 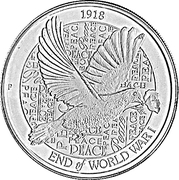 End of World War I

Flying dove with poppy in beak in front of the word peace in several fonts and year above.

Poppies were the first flowers to bloom in the battlefields of Western Europe after the war subsided.

Bullion value: 51.69 USD Search tips
This value is given for information purpose only. It is based on a price of silver at 831 USD/kg. Numista does not buy or sell coins or metal.