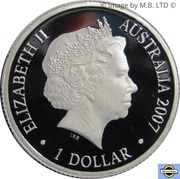 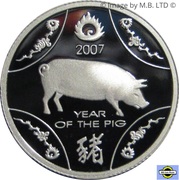 Pig with authentic Chinese symbols all in a symmetrical design

In 2007 the RAM launched an on-going series of Fine Silver (.999) NCLT Proof one dollar coins depicting each Lunar year and their representative animals. The series ran until 2018. This first coin in the series was issued in a capsule in a plush square red box.

The Chinese Zodiac is based on a twelve year cycle, each year being represented by an animal. People born in the "Year of the Pig" are held to possess impeccable manners and taste and to revel in the good things of life. They are honest and loyal, expecting much of their close friends and giving much in return.