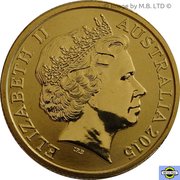 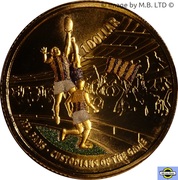 Depiction of Australian Rules Football players in colour taking a high mark with a football. The background shows the crowd waving coloured flags on the circular grandstand of the MCG

This NCLT Aluminium-bronze coin released by the RAM commemorates the 2015 AFL Toyota Premiership Season. The coin was released in a number of different versions as follows:-

Pad Printed in the colours of the winning team Hawthorn, as per the coin pictured here, issued by ballot in a capsule in plush square box with numbered certificate, (Mintage 500)

Fine Silver (.999) Proof versions of the coin were also released in the The Ultimate Collection AFL With Silver Dollar - Sealed Lucky Dip. Versions of this coin that were released this way, (Total Mintage 5,000), were:-