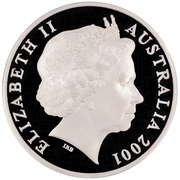 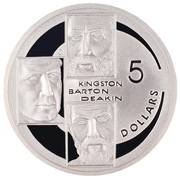 The Royal Australian Mint issued in 2001 a  Federation (1901 - 2001) Masterpieces in Silver Proof $5 Dollars, Five Coin Set with reverse designs paying tribute to Outstanding Personalities who contributed to the Federation of Australia.

There were six original separate British self-governing colonies, Queensland, New South Wales, Victoria, Tasmania, South Australia, and Western Australia who agreed to unite and form the Commonwealth of Australia, establishing a system of federalism in Australia.

This coin depicts Charles Kingston, Alfred Deakin and Edmund Barton who were among the pioneers of the Australian federation movement and oversaw the passage of the federation bill in the UK parliament.

Bullion value: 33.95 USD Search tips
This value is given for information purpose only. It is based on a price of silver at 936 USD/kg. Numista does not buy or sell coins or metal.