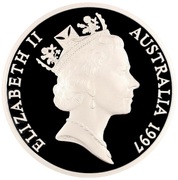 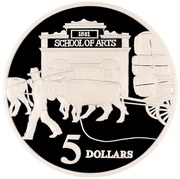 Depiction of an Oxen drawn wagon as a means of transportation with the
denomination below.

The Royal Australian Mint issued in 1997 an Opening of a Continent Masterpieces in Silver Proof $5 Dollars, Five Coin Set with reverse designs paying tribute to the early forms of transport from camels to steam trains which opened up the vast continent of Australia. This particular coin celebrates Ox-Drawn Wagons.

Bullion value: 27.63 USD Search tips
This value is given for information purpose only. It is based on a price of silver at 835 USD/kg. Numista does not buy or sell coins or metal.