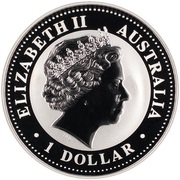 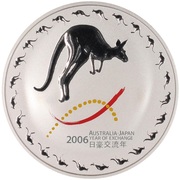 Depiction of a hopping Kangaroo alongside a kangaroo rim decoration.

This coin was issued by the Perth Mint to celebrate the 2006 Year of Cultural Exchange between Australia and Japan. It was issued singly in a capsule in a box. 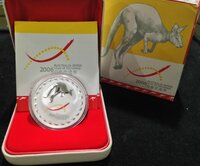 It could also be found as part of a set that included This coin and a 2006 Japanese Proof Set of coins.

Bullion value: 25.83 USD Search tips
This value is given for information purpose only. It is based on a price of silver at 831 USD/kg. Numista does not buy or sell coins or metal.