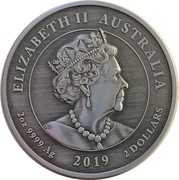 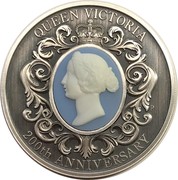 A cameo insert depicting Leonard Charles Wyon's effigy of Queen Victoria wearing wreaths of banksia in her hair. Afiligree design borders the Queen's portrait, with a depiction of the royal St Edward's Crown at the top

The coin has been "antiqued" by hand to give it an unique finish conveying the surface abrasion of an aged artefact.

Bullion value: 36.51 USD Search tips
This value is given for information purpose only. It is based on a price of silver at 587 USD/kg. Numista does not buy or sell coins or metal.