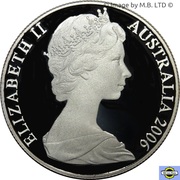 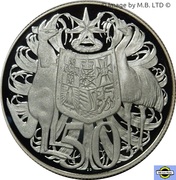 Australian Coat of Arms with large numerical denomination below

This Fine Silver (.999) Proof 50 cent coin was released as part of the annual Fine Silver Proof Year Set in 2006. This set celebrated 40 years since decimalisation and included all eight Australian Decimal coins issued since then. The set also featured the original 1966 Arnold Machin obverse on each coin.

The Royal Australian Mint began releasing Fine Silver Year Sets in 2003 and have continued to do so since then. The Australian Coat of Arms standard reverse 12 sided 50 cent coin has been included in the Fine Silver Proof Year set every year except for 2003 & 2005 when other 12 Sided Commemorative 50 cent coin designs were included in its place. The 2006 Fine Silver Year Set was the only one to include the original design round 50 cent with the Arnold Machin obverse. 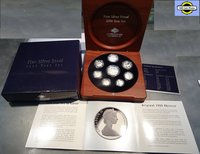 The standard Silver (.800) version of the 50 cent coin which this Silver coin is based on was introduced into circulation in Australia in 1966 to replace the old £sd 10 Shilling Note. This was the only year the coin was minted as it was replaced with the familiar 12 sided Copper-nickel version from 1969.

Bullion value: 15.21 USD Search tips
This value is given for information purpose only. It is based on a price of silver at 835 USD/kg. Numista does not buy or sell coins or metal.