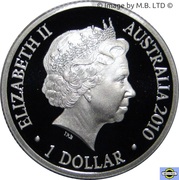 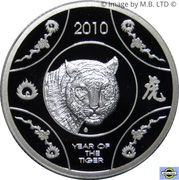 Tiger with authentic Chinese Characters all in a symmetrical design

In 2007 the RAM launched an on-going series of Fine Silver (.999) NCLT Proof 25mm one dollar coins depicting each Lunar year and their representative animals. The series ran until 2018. The "Year of the Tiger" was the fourth coin in the series and was issued in a capsule in a plush square red box..

The Chinese Zodiac is based on a twelve year cycle, each year being represented by an animal. People born in the "Year of the Tiger" are alive to opportunity, with a competitive streak that lets no-one stand in their way. Despite this, they never trample on others' feelings and have a considerate and forgiving spirit.