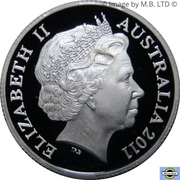 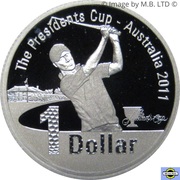 Image of a Golfer Teeing Off with clubhouse in the background. Presidents Cup Trophy and logo are next to the golfer.

This Fine Silver (.999) Proof NCLT coin was issued by the RAM in 2011 to celebrate the hosting of the Presidents Cup Golf Tournament at the Royal Melbourne Golf Club. It was issued as a limited edition release, in a capsule in a plush square black box with numbered certificate.

An Aluminium-bronze version of the coin was issued by the RAM in a Coincard and by Australia Post in a PNC.

The Presidents Cup golf tournament is a prestigious event normally played in the USA. However in 2011 it was held at The Royal Melbourne Golf Course, the oldest golf club in Australia.

In 2011 it hosted two teams captained by Greg Norman and Fred Couples. Norman leads the International team which includes players such as Adam Scott, Geoff Ogilvy and Ernie Els and Couples leads the US team which includes Tiger Woods and Phil Mickelson. These golfing greats are not paid for their participation, instead this is a charitable event distributing more than $23 million to over 380 charities since the first President's Cup Golf tournament in 1994.