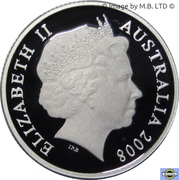 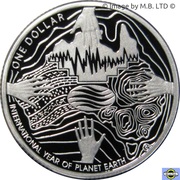 Stylised map of Australia with human hands showing the change we effect on the environment.

This Fine Silver (.999) Proof NCLT Commemorative coin was issued as part of the 2008 Fine Silver Six Coin Proof Set which contained silver versions of coin releases in 2008. A standard 5 cent, standard 10 cent, a commemorative 20 cent, standard 50 cent, this commemorative $1 and a standard $2 cent were part of the set. The coins were issued in capsules in a beautiful wooden box. In addition a special release for the World Money Fair in Berlin was issued, mintage 1,000.

The actual coin commemorates the United Nations declared 2008 International Year of Planet Earth adopting the theme "earth sciences for society". Geological hazards are a key issue for the United Nations and promoting this year was the biggest international effort to promote this field of scientific endeavour.