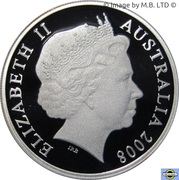 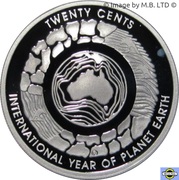 This Fine Silver (.999) Proof NCLT Commemorative coin was issued as part of the 2008 Fine Silver Six Coin Proof Set which contained silver versions of coin releases in 2008. A standard 5 cent, standard 10 cent, standard 50 cent, commemorative $1,standard $2 cent and this commemorative 20 cent coin were part of the set. The coins were issued in capsules in a beautiful wooden box. In addition a special release for the World Money Fair in Berlin was issued, mintage 1,000.

An Copper-nickel NCLT version of the coin was released in the 2008 Year 6 Coin UNC set by the RAM as well as a Proof version that was issued in a special two coin proof set that included a standard MOR $1 coin.

The coin commemorates The United Nations declared 2008 International Year of Planet Earth adopting the theme "earth sciences for society". Geological hazards are a key issue for the United Nations and promoting this year was the biggest international effort to promote this field of scientific endeavour.

Bullion value: 10.43 USD Search tips
This value is given for information purpose only. It is based on a price of silver at 782 USD/kg. Numista does not buy or sell coins or metal.