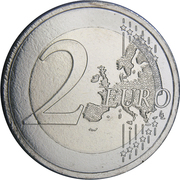 The 60th anniversary of Asterix

For 60 years, Asterix has been a true icon of the French culture. Created in 1959 by scenarist René Goscinny and cartoonist Albert Uderzo, this character embodies the Frenchman with his smartness and sharpness through the Gallic identity. Apart from its artistic line, depicting contemporary society with humour has brought Asterix a great international fame for many years. Since its inception, it has been translated into all the languages of the European Union meeting a huge success. The reputation of Asterix is for example as strong in Germany as in France. It has also been very well established in the United Kingdom, the Netherlands, Spain, Portugal, Italy and Scandinavia for many years. Beyond the French icon, Asterix has become a true figure of the European 9th art.
The design represents Asterix in profile wearing his famous winged helmet. He is surrounded by laurels and Roman inscriptions referring to his 60 years. At the top is the inscription ‘ASTERIX’ and underneath the indication of the issuing country ‘RF’ (standing for République Française). The year of issuance ‘2019’ is inscribed at the bottom, together with the French mintmark and mintmaster mark.
The coin’s outer ring depicts the 12 stars of the European flag.