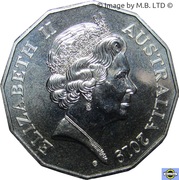 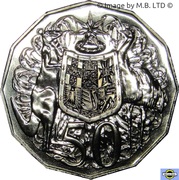 50th Anniversary of the Dodecagon 50c

This Copper-nickel NCLT Coin was issued by the RAM as part of a Five-Coin Set to commemorate the Fiftieth Anniversary of the Dodecagon 50 cent Coin. The five coins in the set each display a different effigy of Queen Elizabeth II as used on the 50 cent coin since it was introduced in 1969 as well as including the new Jody Clark Sixth Effigy being introduced on Australian coins in 2019.

This particular coin in the set displays the 5th effigy by Vladimir Gottwald which was only used on one previous commemorative 50 cent coin in the year 2000 to commemorate the Royal Visit of the Queen to Australia in that year.

The Five coins in the Five-Coin Set are all dated 2019 as follows :-