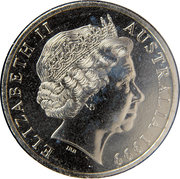 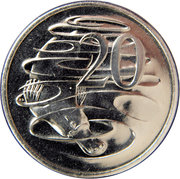 Platypus (Ornithorhynchus anatinus) and the numeral "20"

In 1999 the RAM updated the standard circulation Platypus 20 cent coin with the Ian Rank Broadley 4th Portrait of the Queen on the Obverse. The coin has also been issued in Uncirculated & Proof Year Sets, UNC in WMF Berlin Money Fair Sets, and various Baby UNC & Proof sets. Specimen versions of the coin were issued in Wedding Sets from 2002 to 2009. From 2010 all Wedding Sets were Proof issues. 2019 is the final year for the IRB Obverse.

The 2004 issued coin has two varieties, large and small QE II Head on the obverse, see this image. 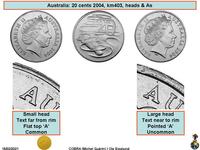