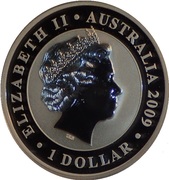 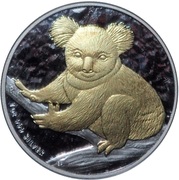 A young koala sitting on a branch gilded with 24-carat gold. A shimmer background is behind the koala. The Perth Mint mintmark is hidden on the branch.

The Perth Mint started the silver koala series in 2007 and started offering them in a gilded version in 2008.
The 2009 design features a single young koala facing out while sitting on a branch.

Koalas are one the few iconic symbols strongly associated with Australia. They are indigenous only to Australia where they spend most of their life high up in Eucalyptus trees eating leaves. Most animals find the Eucalyptus leaves toxic, but the koala has developed the ability to digest them safely.

Wrongly considered a bear, the koala is actually a marsupial. The females have a pouch in which they carry and nurse their young. The koala portray an image of cuddliness, but with long sharp claws for climbing they can be quite vicious if provoked.