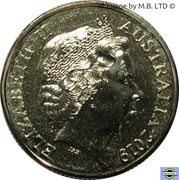 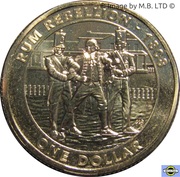 This NCLT Aluminium-bronze commemorative $1 coin produced by the RAM is the second coin in a set of three that will recognise Mutiny and Rebellion in the South Pacific and Australia between 1789 and 1854. This particular coin is about the Rum Rebellion of 1808 and was issued in a large coincard. 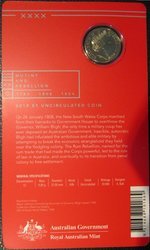 On 26th January 1808, the New South Wales Corps marched from their barracks to Government House to overthrow the Governor, William Bligh: the only time a military coup has ever deposed an Australian Government. Irascible, autocratic Bligh had infuriated the ambitious and elite military by attempting to break the economic stranglehold they held over the fledgling colony. The Rum Rebellion, named for the rum trade that had made the Corps powerful, led to the rule of law in Australia, and eventually to its transition from penal colony to free settlement.

A further Prestige PNC issue of only 200 copies will be released in November 2019 by Australia Post.

Members from this site want to exchange it: one, hxie