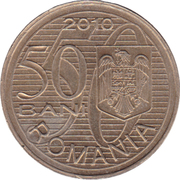 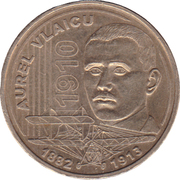 100th Anniversary of the First Flight of Aurel Vlaicu's Plane

Several items in descending order: year of issue “2010”, face value “50 BANI”, Romania’s coat of arms and the inscription “ROMANIA” in an arc of a circle; on a horizontally lined background, the face value of the coin “50” reproduced by means of larger-sized characters.

On the left, on a vertically lined background, the inscription “AUREL VLAICU” in an arc of a circle and year “1910”, when Aurel Vlaicu made his first flight by an aircraft of his own design, and his portrait on the right; below, a depiction of “Vlaicu I” aeroplane and the years of Aurel Vlaicu’s birth and death, “1882” and “1913”.