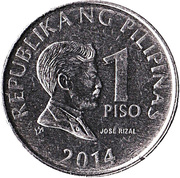 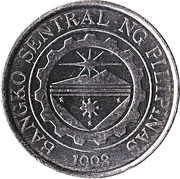 Head of José Rizal facing right, value to the right, date below.

Translation: Republic of the Philippines

Bank seal within a circle and gear design, 1993 (date Central Bank was established) below.

Translation: Central Bank of the Philippines

This coin was NOT minted in 1993; this is just the date the Central Bank of the Philippines was established.

Interestingly, the 1 Piso coin is almost an exact match in size, weight, and composition with the (more than 10 times more valuable) 1 dirham coin from the United Arab Emirates. Because of the large Filipino population working in the U.A.E., this fact was quickly discovered and is now widely used to exploit vending machines. More information at gulfnews.com

» Buy coins from the Philippines at eBay