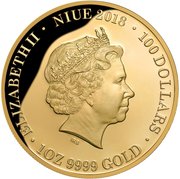 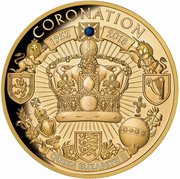 The Imperial State Crown, as worn by Queen Elizabeth II upon leaving Westminster Abbey at the end of her coronation ceremony in 1953.

Bullion value: 1 795.84 USD Search tips
This value is given for information purpose only. It is based on a price of gold at 57 737 USD/kg. Numista does not buy or sell coins or metal.