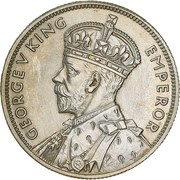 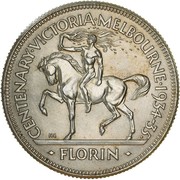 100th Anniversary of Victoria and Melbourne

Issued to commemorate the hundredth anniversary of Victoria (1834) and the foundation of Melbourne (1935). The coins were sold at a premium of one shilling to help finance the celebrations. 75,000 were struck, but at the end of the event 21,000 remained unsold and were melted. It features the centenary logo of an equestrian figure, slightly modified to fit the circular format of a coin (the logo was set in an oval).

Members from this site want to exchange it: Dido77, Ciin

Bullion value: 9.22 USD Search tips
This value is given for information purpose only. It is based on a price of silver at 881 USD/kg. Numista does not buy or sell coins or metal.