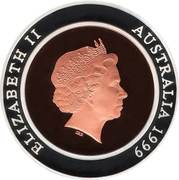 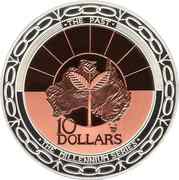 The Millennium - The Past

Seedling on Australian map above denomination with rising sun background.

Lettering:
· THE PAST ·
10 DOLLARS
·THE MILLENNIUM SERIES·

Released by the RAM as part of a three coin series to celebrate the turn of the Millennium is this Bi-metallic Copper & Silver $10 Proof Coin.