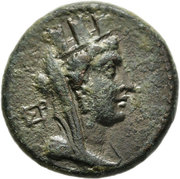 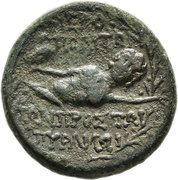 Tyche appears on many coins of the Hellenistic period in the three centuries before the Christian era, especially from cities in the Aegean. Unpredictable turns of fortune drive the complicated plotlines of Hellenistic romances, such as Leucippe and Clitophon or Daphnis and Chloe. She experienced a resurgence in another era of uneasy change, the final days of publicly sanctioned Paganism, between the late-fourth-century emperors Julian and Theodosius I who definitively closed the temples. The effectiveness of her capricious power even achieved respectability in philosophical circles during that generation, though among poets it was a commonplace to revile her for a fickle harlot.

River-gods were represented often on Greek, Greek Imperial (Roman Provincial) and Roman Imperial coins, as a personification of a river that flowed through that area, as it was an important feature of a city. The coins of the Roman Republic do not have any representations of river gods. Some river gods represented on ancient coins were that of the Tiber, Nile, Danube and many more. River gods on ancient Roman coins are most often depicted on Roman provincial issues (another term for Greek Imperial). There are also Greek coins that depicted personifications of river-gods usually as the head of that god. On Greek Imperial coins, the river-god is usually depicted reclining, holding reeds, and leaning on over-turned jug from which water flows.